From the reporting, you’d think the Montgomery School Board (DC) just did something grand and sinister—and all at the behest of the local Muslim community.

As of next year, all Christian and Jewish holidays will be removed from the calendar. That means no more Christmas, no more Easter and no more Yom Kippur.” All “because they did not want to disrespect or be insensitive to the Muslim community.

For Bill O’reilly, the Board is “caving in” to Muslim pressure: “They just wiped out all our traditions because [of] these people.” 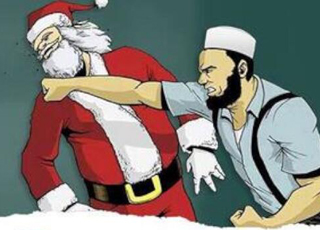 Not quite. Actually, something was stricken from the school calendar, but it wasn’t Christmas, Easter and Yom Kippur. Rather, it was “Christmas,” “Easter,” and “Yom Kippur.” As in, the words. And by “school calendar,” I don’t mean a yearly series of events, but literally the piece of paper on which the event names are printed.

Words on a page. Nothing else will change. Schools will still close for all the same holidays as ever before. They will just be called something else in a single run of a single year’s calendar.

(Nor is anyone picking on Christians or Jews. All religious holiday names were stricken—it’s just that all of them happen to be Christian or Jewish. Nor were any strange new “Muslim holidays” added.)

Ah yes, that hallowed Christmas tradition when all good kiddies across the world race wide-eyed to the mailbox…for the new Montgomery School District fiscal calendar!

Even if this were a big deal, it makes no sense to blame the Muslim community for something the Board did. For one, it’s the opposite of what they were asking for.

For years, community leaders have petitioned the Board to recognize either of two feast festivals, Eid al-Adha (end of hajj) or Eid al-Fitr (end of Ramadan), with school closures. This would amount to equal recognition of Muslim students given the traditional closures on Christian and Jewish holidays.

But this year, they weren’t even asking for this much. By chance, during the upcoming school year (2015-16), Eid al-Adha falls on the same day as Jewish Yom Kippur, for which schools will already be closed. So Muslim leaders modified their request, asking only that the words “Eid al-Adha” be printed in the new calendar next to “Yom Kippur”—instead of an inch or so below, where there are printed now as a kind of afterthought. (Leaders admit this is a “strictly symbolic issue.”)

The Board answered this modest request by striking all religious names from the record, calling it “the most equitable solution.”

Far from marking this as a great victory, the Muslim campaigners are pretty pissed:

‘By stripping the names Christmas, Easter, Rosh Hashanah and Yom Kippur, they have alienated other communities now, and we are no closer to equality,’ said Saqib Ali, a former Maryland state delegate and co-chair of the Equality for Eid Coalition. ‘It’s a pretty drastic step, and they did it without any public notification.’

(I’m sure he’s celebrating on the inside. Takkiyah and all.)

You people want equality? We’ll give you equality

Sure, the Board’s decision is “equitable.” Voting to torture every student for five minutes would be “equitable” too. But to pretend this is therefore “what the Muslims were asking for” is disingenuous.

Nonetheless, dumbasses across the county are scapegoating the Muslim community as spoilers (even though, you know, nothing is actually spoiled). The decision has deflected heat away from the Board, and onto the Muslims—exactly as it was designed to do.