← Does removing Confederate monuments “erase history”? (And what the hell does “erasing history” even mean?)
Read the transcript closely: Officer Darren Wilson implicitly confesses to murder →

Students at MTSU (my alma mater) have resurrected the campaign to change the name of the ROTC building, currently named for Nathan Bedford Forrest—slave trader, Confederate war criminal, and first Grand Wizard of the KKK.

What follows is my effort to broadcast the campaign and provide reasons to endorse it. 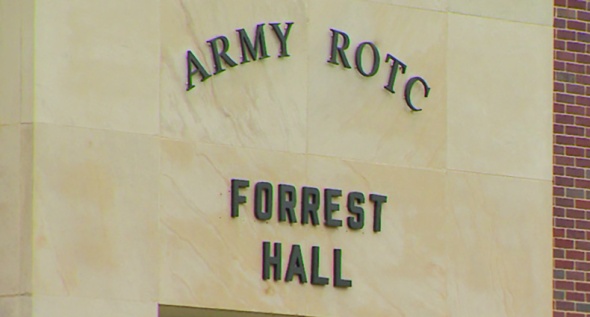 Nathan Bedford Forrest: A racist sleazeball, even “for his times”

If the well-known facts about Forrest’s life aren’t enough to convince you he shouldn’t be memorialized, consider some less celebrated biographical gems:

(a) Forrest’s attitude toward what he did for a living was simply wicked. In one advertisement, he both boasted about separating black families and cruelly mocked female slaves’ vulnerability to being raped—bragging that he had captured the daughter of famous slave-turned-Northern-statesman Frederick Douglass, and she was “of the class known among dealers as a ‘likely girl’.”

(b) His final career was as a hyper-exploitative broker of (forced) black convict labor, on a pestilent island in conditions described as “worse than slavery.”

(c) His reputation as “the butcher of Fort Pillow” is well-deserved. First, nobody denies a massacre occurred, nor that Forrest was in charge. Before the attack, Forrest sent a note to the Union generals promising to massacre their forces if they didn’t surrender. And when they failed to surrender, they were indeed massacred; further details are fuzzy, but also unimportant. (In later years, when challenged about his crimes, his go-to response was to cruelly mock the slaughter, claiming that his men ate the black soldiers and he himself ate their murdered babies.)

(d) Finally, Forrest hacked a black field hand to death with an axe for the crime of refusing to drain a puddle quickly enough. This prompted the rest of his workers to mutiny, rat-holing Forrest in his own house by torch and pickaxe until the deputy could rescue him. (Forrest was tried for murder and acquitted only due to the corruption of a white judge.)

To address some common defenses of NBF and his imagery:

(i) But he was very good at something

NBF was perhaps the greatest American(?) cavalryman ever. But surely this is not enough to rate statues and nameplates. Think about it: Outside of contemporary pop culture, celebrity is inevitably attended by ‘greatness’ of some sort or another. This applies no less to the infamous: Hitler’s oratory skill is only the most famous example. Even, say, notorious serial killers only become so for being more clearly fastidious, dedicated, and brave than average folk.

Point being, if “he possessed some very good qualities” is your sole argument for memorializing Forrest, this would allow memorializing virtually anyone well-known enough to be considered. So clearly, more must be said. Some consideration of “the whole person” must be made.

(ii) But he changed in his later years

Forrest’s alleged penitence in later life is overblown. He only renounced the Klan because, as his best friend recounted, “we knew it would not be needed again.” Namely, his exit followed a particularly violent campaign of voter intimidation in which NBF heartily participated, and which won the South for the Democrats that election year. (Similar tactics would keep them winning for the next twenty election cycles.) This was a period when intense federal and state heat was causing many prominent persons whom no one doubts were racist and remained so to leave and “renounce” the Klan. This egocentric pragmatism should hardly be confused with a change of heart.

NBF’s late wish for the “advancement of the negro” had economic and political components, but it isn’t clear it ever had a moral one. He felt that things like trades training for black folks was good for business—and not just generally, but for his business. His ‘turnabout’ on race relations emerged apace with his plan to populate the inferior lands along his railroad with free black townships—which of course required black tradespeople, etc.

He further flirted with a political alliance of conservative blacks and Southern whites; only the entire, stated point of this was to counter the only political force dedicated to the unqualified “advancement” of the former, the Radicals in the Republican Party. The appeal to blacks was always cast in a “devil you know” mood: i.e., “Don’t ask for too much or you’ll stir up trouble with those guys and lose what you already have.”

In the end, “advancement” from some low baseline is one thing; full equality with whites is quite another. And NBF was clear to make the distinction until the day he died.

(iii) Let history be (or something)

Some argue that we should take a “neutral” stance toward historical artifacts: History happened this way, and there is no use denying it just to make ourselves feel good.

For instance, from the Change Forrest Hall campaign Facebook page:

(First, I doubt the sincerity of those who make this argument—because they are inevitably the most vociferous defenders of NBF’s resume. That is, you can’t say history should stand “no matter what it was like” while at the same time saying “it should stand because it was like this.” But that’s a side point.)

Let’s be clear: The items in question aren’t historical artifacts. At least, not the way these people mean; they aren’t Civil War artifacts. The three contested representations of Forrest in Middle TN date to the late 1950s (Forrest Hall), the late 1970s (bust in the state Capitol) and late 1990s (the I-65 statue). Granted, these are artifacts about history, but so what? The blog post you’re reading is an artifact about history. Protest graffiti on a statue of a Civil War officer is an artifact about history. That status alone doesn’t render something untouchable.

In the end, these critics are confusing a representation with an honorarium. A Forrest nameplate doesn’t just give information about the past. It doesn’t just say “this happened.” It says, rather, “this happened, and it was good.” Of course, you’re free to say that Forrest’s legacy is a good one, all things considered. And we can talk about that. But drop the pretense to neutrality. This debate is necessarily about what we value—what we think is good. It has to be.

All that said, I suggest that the technicalities of NBF’s biography are largely irrelevant to the question of whether to keep or remove his busts and nameplates. It is possible for someone’s image to function as a racist symbol whether or not he was always—or even ever—a nasty racist himself.

Ninety years after the Civil War’s end, the South saw an explosion of new Confederate iconography. Busts and statues of CSA heroes popped up all over. High schools adopted little rebel guy sports mascots. In 1961, the South Carolina legislature ‘suddenly’ elected to fly the Battle Flag over the statehouse.

The timing of this trend—plus the transcripts of the dedication ceremonies—show without a doubt that it functioned as a protest of the nascent black Civil Rights Movement, culminating in the Brown v. Board of Education decision to desegregate public schools.

The choice to name MTSU’s military building after Nathan Bedford Forrest (1958) should be viewed in this context. As such the nameplate is “bigger” than Forrest himself and has a meaning independent of him. It was chosen to mock and dispirit black people struggling for human rights. In this sense, it functions as a racist symbol no matter the “real facts” of NBF’s life. There are other reasons, but this alone warrants the change.

[Come rally with us to get this done!]